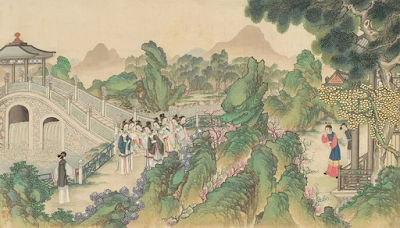 Perhaps you have heard of Hong lou meng by Cao Xueqin, better known in English as Dream of the Red Chamber, A Dream of Red Mansions, or The Story of the Stone. Perhaps you think of reading it but hesitate because of its daunting length and unfamiliar culture? Or have little interest because outside China very few people seem to have read it? You’re missing out.

Here’s why you should.

In Chinese literature, Hong lou meng is one of the Four Great Classic Novels, together with Romance of the Three Kingdoms, Water Margin (aka Outlaws of the Marsh, Tale of the Marshes, or All Men Are Brothers), and Journey to the West (aka Monkey). Many people would even say that Hong lou meng is the greatest Chinese novel.

In the West it is not much read, but I myself think it is one of the greatest novels in the world, on par with the finest works of Western literature such as War and Peace, Anna Karenina, Moby Dick, Middlemarch, Lolita, and so on. Kenneth Rexroth, American poet, translator, and critical essayist, thinks that The Tale of Genji and Hong lou meng are the 2 greatest novels in the world, in the whole history of literature.

Hong lou meng is usually published as 120 chapters, about twice the length of War and Peace. However, only the first 80 chapters were written by Cao Xueqin, the last 40 chapters have been disputed for years—could be written entirely by Gao E, drafted by Cao Xueqin and redacted by Gao E, or written by someone else and edited by Gao E. I personally believe it’s the last possibility and only read the Cao Xueqin chapters (after reading 81-85).

Even then, it’s a long book with great scope and about 400-500 characters.

Hong lou meng has a wide range of characters, belonging to different classes of society, from Imperial Consort and members of the palace all the way to servants and maids. The novel depicts lots of different types of people, and the characters feel real and are all distinct.

Placed next to the vast world of Hong lou meng, most novels would appear small and narrow.

4/ Depiction of female characters and sympathy for women:

The novel is rich and diverse in its portrayal of female characters, and Cao Xueqin seems to have lots of sympathy for the lives of women in 18th century China, from Imperial Consorts to servants and slaves, from concubines to their daughters, etc.

The most intelligent, poetic, and excellent ones in the story are girls—in a Confucian society, where women are considered inferior to men and only boys can go to school and take exams, in the private poetry club, the best poets are girls and the central male character Giả Bảo Ngọc (Jia Baoyu) always comes last.

My favourite character in the book is the vivacious, forthright and open-hearted tomboy Sử Tương Vân (Shi Xiangyun), followed by Giả Thám Xuân (Jia Tanchun), a clever daughter of a concubine, a fenghuang born in crows’ nest.

5/ A striking and fascinating anti-heroine:

Next to the lovable and interesting girls, who are all different, Cao Xueqin also creates one of the most compelling, complex, and unforgettable bitches I’ve encountered in literature: Vương Hy Phượng (Wang Xifeng).

He creates a character who is cruel, malicious, ruthless, jealous, cunning, and manipulative, but at the same time also depicts her as clever, capable, and extremely fascinating and compelling, and gives her depth—she is despicable, but there are moments the reader cannot help sympathising with her or admiring her.

While servants seem to be invisible or only have secondary roles in lots of classic Western novels, the servants in Hong lou meng don’t get any less attention from Cao Xueqin, and they’re all complex individuals. Some of the most likable characters in the novel are servants—my favourites are Bình Nhi (Ping’er/ Patience) and Tình Văn (Qingwen/ Skybright). The lead servants or senior maids are all different and complex.

This doesn’t mean that Cao Xueqin is on the side of servants against the masters and mistresses. This is a vast world, and he writes about all kinds of servants: gossipers, flatterers, thieves, hot-tempered ones, wanton ones, greedy ones, lazy ones, unreliable ones, those who try to take advantage of the household, those who try to intimidate a soft or inexperienced mistress, those who get special treatment and fear nothing and curse the entire master family, etc.

There is lots of poetry in the novel, lots of references to classical Chinese poetry. Poetry is also a means of characterisation.

8/ Dream elements and the real/unreal theme:

The characters are very realistic, but Hong lou meng is more than a social novel, family novel, or novel of manners—it has a frame story of a Sentient Stone left behind by Nuwa when she mended the sky, and the stone now wants to come to earth to experience life. It is reincarnated as Giả Bảo Ngọc (Jia Baoyu), who is born with a jade in his mouth, hence the name.

At the beginning of the novel, these couplets appear:

“When false is taken for true, true becomes false;

If non-being turns into being, being becomes non-being.”

(The Yangs' translation, which I think is better).

The real/unreal theme runs through Hong lou meng, and there are also lots of dream elements that add more layers of meaning to the novel.

“Whether we fuck arseholes or not, what business is it of yours? You should be bloody grateful we haven’t fucked your dad.”

(I won’t say which chapter this is from).

10/ Understanding of Chinese culture in particular and East Asia in general:

It’s no wonder that people often say that Hong lou meng is the novel to read if you want to understand Chinese culture, values, and mindset: Confucianism, hierarchy and order, filial piety, relationships, women running the household, etc.

To someone like me, it’s a feeling of familiarity—I understand the culture, hierarchy, and manners, and recognise lots of types of people in it.

What then are the tips for reading Hong lou meng? Similar to my tips for reading The Tale of Genji: draw your own family tree, create your own character list and make notes, etc. Regarding translation, if you read it in English, there are only 2 complete English translations and the more highly acclaimed one is the Penguin Classics one by David Hawkes and John Minford.

Here is a list of my blog posts about Hong lou meng (note that I had some issues with it at the beginning, but adjusted myself to the book and came to love it after some time):

Be not afraid, gentle readers! Comment! Discuss! Argue!
(Make sure to save your text before hitting publish, in case your comment is swallowed by the whale and disappears forever).