After the 2016 version starring Don Warrington, this is the second King Lear I’ve seen. Or third, if you count the Russian film directed by Grigori Kozintsev. Or even fourth, if you count Kurosawa’s Ran.

A central difference between Michael Hordern in the BBC production and Don Warrington—and I suppose most other Lears—is that Michael Hordern’s Lear is not monumental, not larger-than-life, not striving against cosmic forces. He plays Lear as old, frail, and feeble-minded, and this version seems to be a King Lear on a small scale. 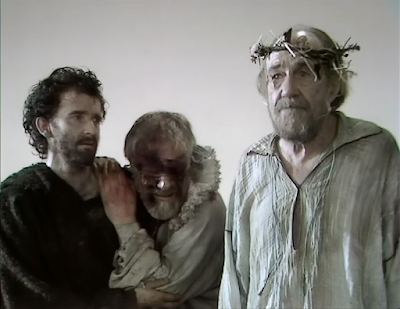 Some people may find it a disappointment, but I do like this different approach. It works. His entire performance is great, but there are three scenes I find particularly magnificent: the scene in the storm, the meeting between Lear and blind Gloucester, and the final scene with Cordelia. There is no need to talk about the final scene—the line “Why should a dog, a horse, a rat have life,/ And thou no breath at all?” always brings tears to my eyes. But the scene of mad Lear meeting blind Gloucester is particularly good: it is a tragic scene, a cruel scene, but at the same time there’s a kind of terrible comedy in it.

“LEAR I remember thine eyes well enough. Dost thou squiny at me? No, do thy worst, blind Cupid! I'll not love. Read thou this challenge; mark but the penning of it.”

I also love the way he says the line “Let me wipe it first; it smells of mortality.”

Another performance worthy of praise is Anton Lesser playing Edgar. When reading the text, I think there isn’t much to the role of Edgar, and yet in the hands of a fantastic actor such as Anton Lesser, he’s transformed into something more tragic, more haunting. He’s even more interesting than Edmund, portrayed by Michael Kitchen.

In the 2016 version (directed by Michael Buffong and featuring Don Warrington in the titular role), my main complaint is about Fraser Ayres as Edmund—partly because he overacts, partly because he lacks the attractiveness of Edmund. In the 1982 version, Michael Kitchen is attractive—one can understand why Goneril and Regan both fall in love with him and plot against each other—but it’s a bland, unmemorable performance.

However, that’s not my main complaint about the 1982 version—it’s the lack of comedy. King Lear is a tragedy, a bleak, devastating play, but there’s comedy in it, and I think the main problem is Frank Middlemass’s performance as the Fool. Jonathan Miller’s decision to have an old Fool, someone who has probably grown up with Lear, is an interesting one and it could work. The scene on the heath feels very different when the Fool is as old and frail as Lear. But to me, Frank Middlemass isn’t funny, so in many scenes, the Fool comes across as angry, bitter, and moralising. I much prefer Miltos Yerolemou in the 2016 version.

The unfunny Fool almost ruins the first half of the play for me, and yet the second half is overwhelming. If you really think about it, King Lear is in some ways not very logical and realistic—some of Tolstoy’s complaints are perfectly valid—but it has a strange, overwhelming power I can’t quite explain. By the end, I’m devastated. And the 1982 version gets that right.

It is largely thanks to Michael Hordern and Anton Lesser. I also like Penelope Wilton—her girlish smile as she watches her husband gouge out Gloucester’s eyes and urges him “One side will mock another; the other too” is unnerving. And Brenda Blethyn is closer to my idea of Cordelia than Pepter Lunkuse in the 2016 version.

Despite some imperfections, the 1982 King Lear is excellent.

Be not afraid, gentle readers! Comment! Discuss! Argue!
(Make sure to save your text before hitting publish, in case your comment is swallowed by the whale and disappears forever).