Contested Will by James Shapiro 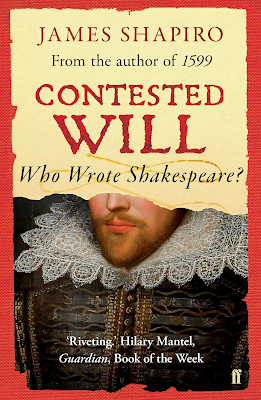 In the last section “Shakespeare”, Shapiro writes about the evidence proving that Shakespeare was indeed Shakespeare from Stratford-upon-Avon. He also explains why many of the arguments against Shakespeare come from ignorance of, and mistaken assumptions about, life and writing and relationships in the Elizabethan and Jacobean eras.

Here is my full twitter thread about Contested Will, with photos of many interesting passages from the book:

Interestingly, James Shapiro also warns about the danger of reading Shakespeare’s plays and poems as autobiographical and assuming that he drew from personal experience, which is done by both anti-Stratfordians and Shakespearean scholars who believe Shakespeare was Shakespeare—things were different back then.

Many anti-Stratfordians tend to say that, besides what they call a lack of training and personal experience, Shakespeare from Stratford-upon-Avon doesn’t have the personality of the Shakespeare of the plays, but what personality? J. Thomas Looney, the first proponent of the Oxfordian theory, even makes a list of personality traits and I personally don’t know how anyone can do so. Recently I’ve read 3 tragedies (Macbeth, Othello, Romeo and Juliet), 3 comedies (A Midsummer Night’s Dream, Love’s Labour’s Lost, Much Ado About Nothing), and 1 history (Richard II), before this, I read another 3 tragedies (Hamlet, King Lear, Julius Caesar) and 2 comedies (Twelfth Night, As You Like It)—they are all different and Shakespeare speaks in so many different voices and never in his own voice that it’s impossible to know his personality. I cannot see his personality and views the way I can see other authors; I can or at least think I can see authors who try to be invisible on the page, such as Flaubert or James, I can even see Jane Austen’s moral vision, though Woolf says Jane Austen’s mind “consumes all impediments” and we cannot know her; but I cannot see Shakespeare because his plays have such a great range, a diversity of voices and views and subjects, and do not share a single vision.

Back to Contested Will, it’s a good, enjoyable read, and especially useful if you want to learn about the different norms and habits during Shakespeare’s days, and the development of the authorship debate.